After seeing Jake take off with all his belongings in just 2 bags I decided it was time to have a big clean out. And I started by bringing everything out of my room into the loungeroom. And I succeeded in getting rid of half my clothes. No one could believe how much stuff I had packed in there until I brought it all out. I also want to try the house swap thing sometime this year. But I needed to make the place a little more inviting first so I could make nice pics for my house swap ad. The bedroom pic is one of the photos I will use in the ad. 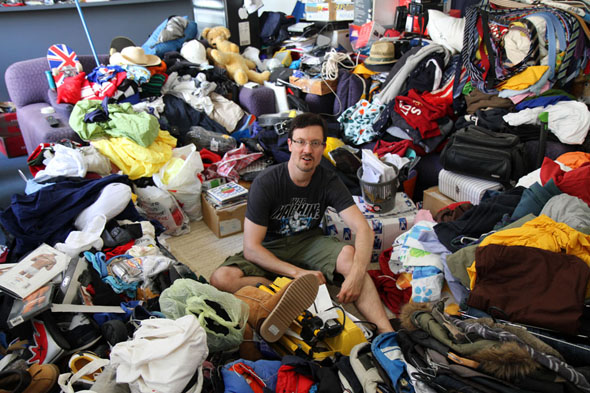 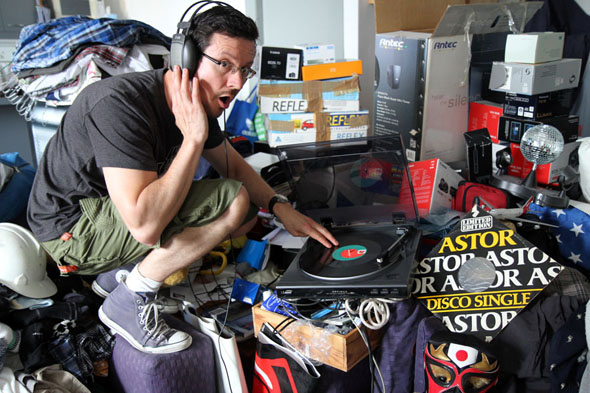 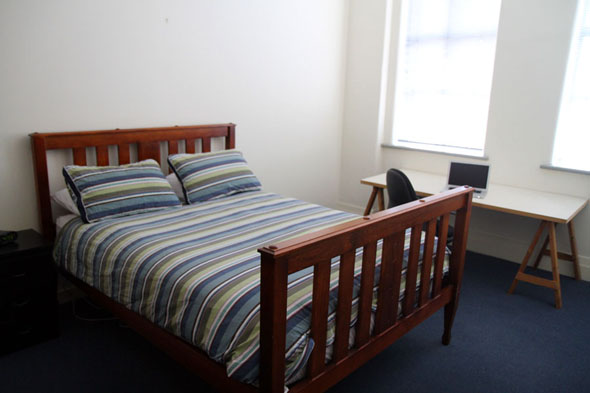 This took me by surprise when I heard this news last night. Qantas has announced that it will stop flying from Sydney to San Francisco in May. Instead it will send one of it’s 747s from Sydney to Dallas and returning via Brisbane. I didn’t actually think any air plane could fly that far. But the 747 long range plane can do the 16 hour flight. They say that the change was better to meet more American Airlines flights to other cities in the US. Soon we will be able to take Qantas flight numbers to a holw lot of places like Cleveland Ohio, on AA aircraft. It will be sad not being able to fly directly in to San Francisco anymore. Perhaps I should take one more trip there before May.
This photo was taken at San Francisco International Airport in June 2009. 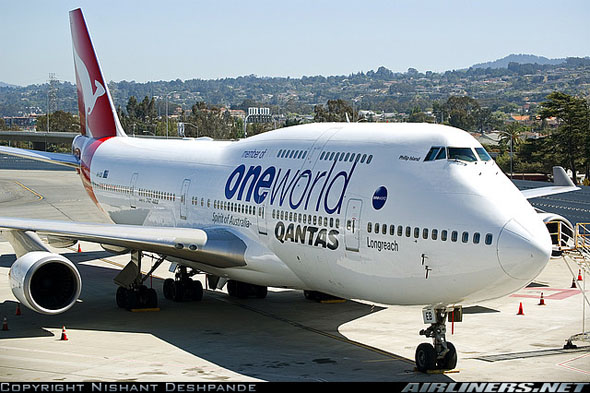 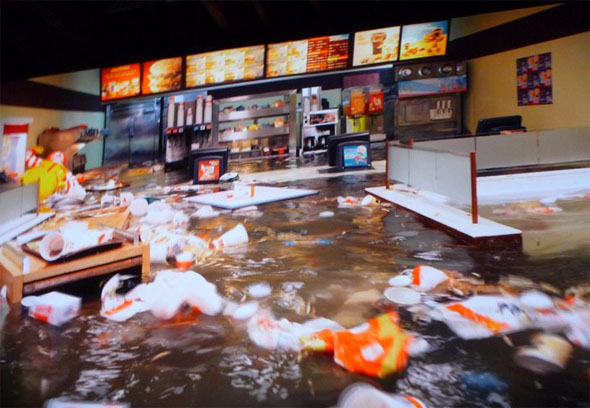 It might be good if the kids went without for a few days. This is one of the McDonalds outlets flooded in Queensland.

It seems that the new is getting worse each day for Queensland. My family seems to be living in one of the very few corners of the state which is not under water. They have been very lucky. I read today that the area under water today would cover all of Germany and France. It’s pretty amazing. Today the capital city is certain to be flooded as the major river around it swells with water coming from the inland rains and flooding. All the inner city workers were sent home for at least a couple of days to avoid being trapped in the city. Check out Couriermail.com.au for videos of the floods.
Again a little humour from the Queenslanders… 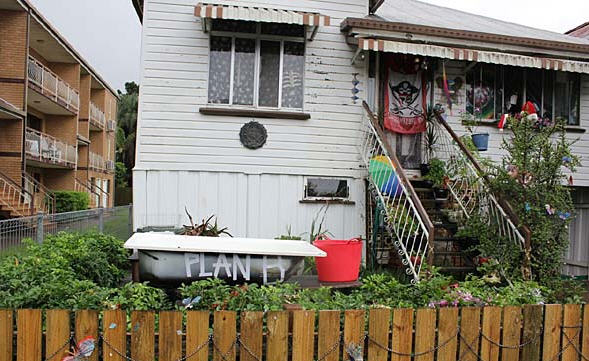 The floods in Queensland have been all over the news here for some time now. But this morning I woke up to the news of many deaths. It seems that the flash flooding is not over yet and it’s heading closer to the coast and in to larger cities. It makes me wonder where all of this water will end up. They reported that one little country town had water the size of 3 times Sydney Harbour going through it. And it would take up to 3 months for it to filter through the river systems down to South Australia.
What I am finding incredible are the imges being shown on TV and in the newspapers. If you go to Couriermail.com.au and look for the links to the pictures of the floods you will see some amazing photos. This is just one of my favourite photos which shows just how easy going Queenslanders are. 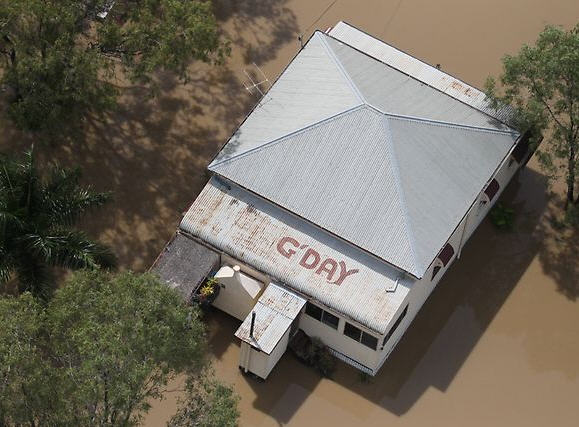 I’m up earlier this morning to see Jake off. He decided a couple of months ago to go exploring the world. It was an interesting process to see him getting rid of all his belongings to end up with just the bags on his back. Jake is going to started his adventure by living in southern Asia. I’m going to miss him a lot. We’ve been mates for a very long time. 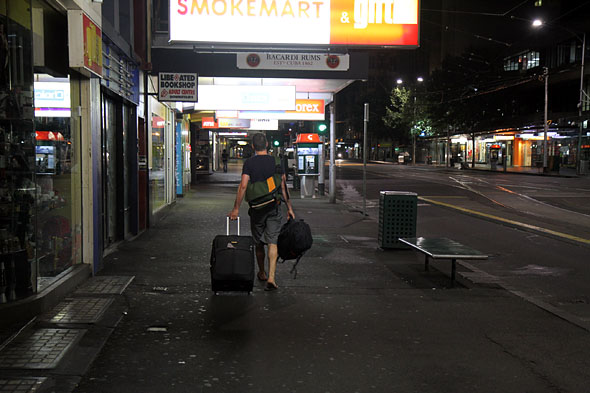 I’m testing posting via email today. I’ve realised that the reason why I don’t post often is because of how clunky it is to post via the typical WordPress interface. So if this works well I’ll be able to post updates much faster. In the meantime here’s a pic of Jake and I at the Journal cafe on Flinders Lane over the weekend. We were escaping the heat in my apartment for somewhere cool with free WiFi. Unfortunately the free WiFi surrounding journal does not work very well. So I will have to keep looking for nice cafes in the neighbourhood that serve up free WiFi. 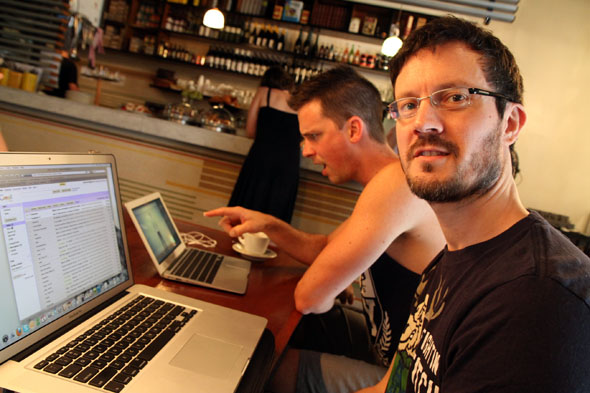 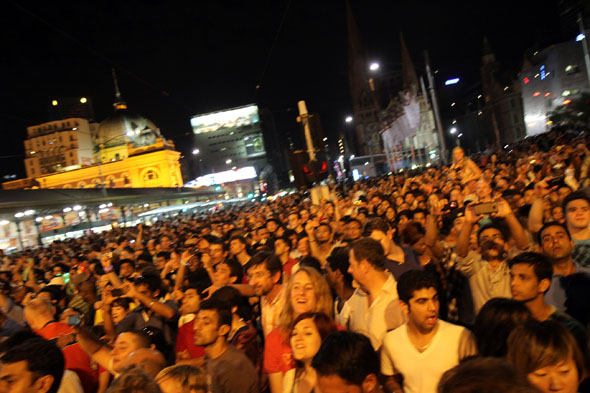 This crowd was just 1 block from my place last night as they all gathered to watch the annual New Year’s Eve fireworks display.   I wasn’t going to go out amongst it last night until I heard that the CBD towers were going to have fireworks going off them.   This has only ever happened twice before (that I know of).   That was for the opening and closing ceremonies of the Commonwealth Games a few years ago.   I ended up being jammed in a fairly bad position in the crowd at the stroke of midnight so my shots are not that great.   But I did get some good shots of the Arts Centre spire.  It was the first time it has been used in the fireworks display.   Overall the crowd was pretty friendly and I didn’t see much drunkeness as we’ve seen in past years. 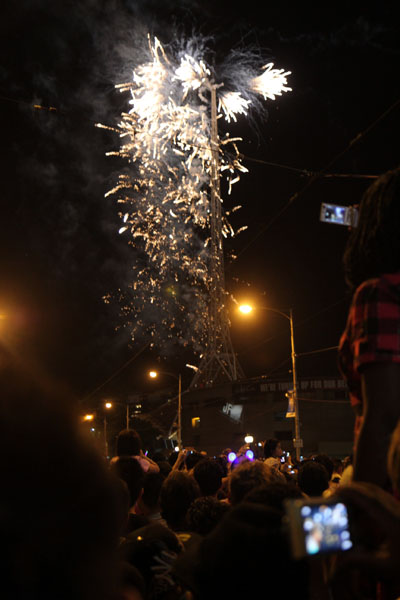 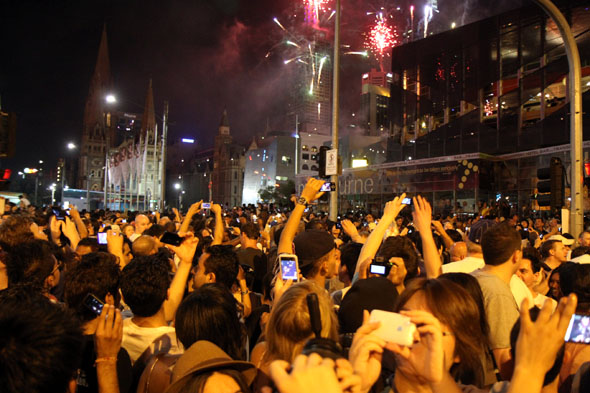 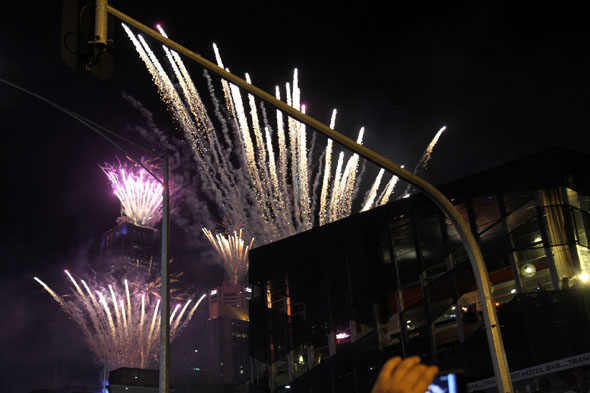 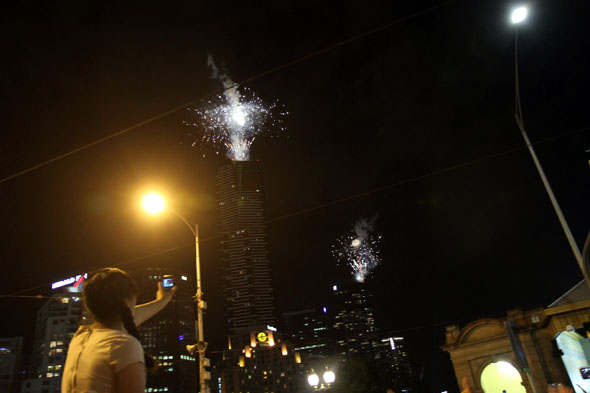 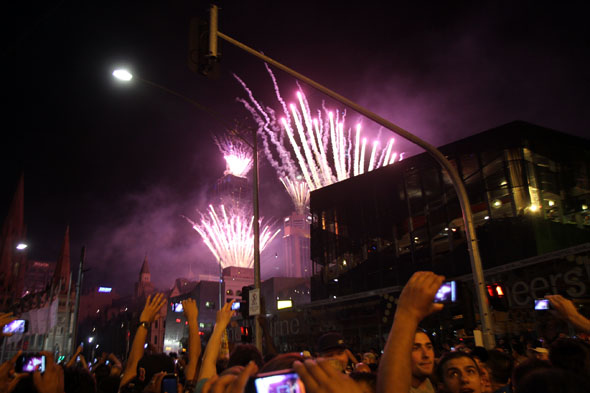 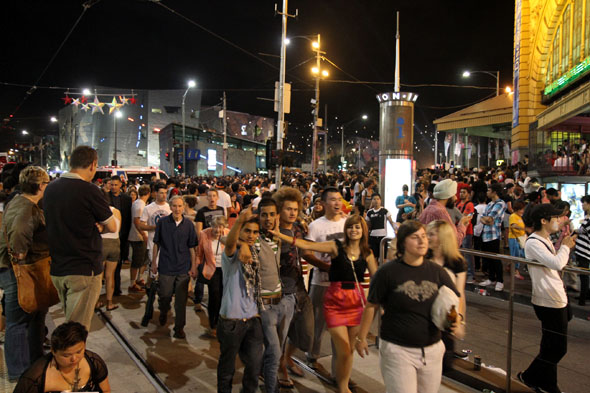