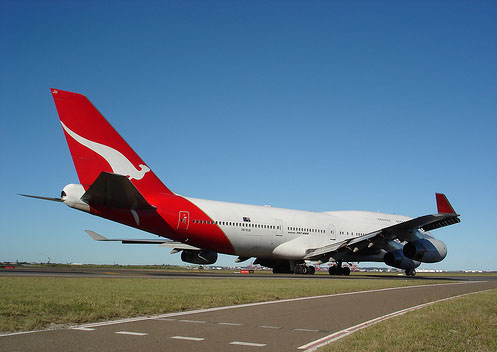 This week after much agonising about my vacation this year I finally booked my flights to San Francisco and Vancouver!Â Â  I leave on the 28th of September.Â Â  I decided to fly over on Qantas via Sydney to San Francisco to avoid the hellish customs clearance lines at LAX.Â Â  And then back via LAX to Melbourne so I don’t have to transfer between terminals at Sydney on the way back.
I will spend 10 days in San Francisco and then a week up in Vancouver.Â Â  I can’t wait! 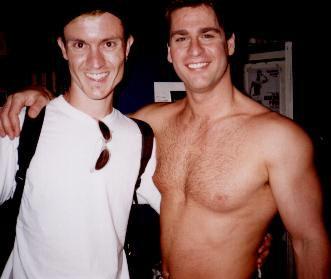 Last night I go home just in time to see Zach win the title of Friday Night Games Champion for the year.Â Â  I don’t think he actually won the games night before last night.Â Â  So Big Brother 07 wraps up on Monday night with the announcement of the winner.Â Â  I’m really hoping now that it is Zach.Â Â  If the vote was on who entertained us the most…Â  it would go to Zach.Â Â  The last gay man to leave the house.
Without realising it he may have planted the seed over a week ago when he was asked who should win Big Brother out of the remaining housemates.Â Â  He said Aleisha.Â Â  He was genuinely starstruck by Aleisha when he entered the house as an intruder half way through the series.Â Â  He freely showed that he had a crush in resident spunk Billy, and was rivelled all of them when it came to hamming it up in the house.Â Â  But it was what he said that was important when he said Aleisha should win.Â Â  We have already celebrated the alpha male enough in Australia….Â Â  it’s time for someone different to win.Â Â  I think that someone is Zach.
I actually teared up when his mate (also Zach) appeared in Friday night games.Â Â  Zach’s prize for winning the games was to spend 1 minute with his mate Zach.Â  But it was really our prize for watching….Â Â  the minute’s awkwardness was priceless….Â Â  surrounded by several cameras they bumbled through not knowing what they could say.Â Â  It reminded me of when gay farmer David run out onto the ramp at his eviction to find his boyfriend, and the music swept up with “Summer Rain”….Â Â  it’s VERY good TV.
If you do suffer post-BB07 depression I suggestion you check out these two sites for the podcast commentary that has been posted all through this series.Â  There are VERY interesting interviews with the housemates as they left the house and interviews with past directors of Big Brother.Â Â  It’s been a fun year! 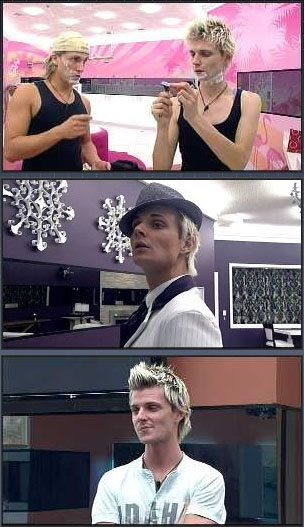 Earlier this week the Melbourne fire brigade were called to the Crazy Horse Cinema to put out a fire.Â  I was in Sydney at the time so I missed all the action in the nearby building.Â Â  The flames appeared to be coming mostly from the video booth arcade in the back of the building.Â Â  Knowing the kind of crazies that go in and out of that place I can imagine what actually happened.Â Â  A friend of mine suggested that maybe a bottle of amyl backfired in the basement complex.Â  There were no reported injuries during the incident.Â Â  It seems weird walking past there now that the place is all boarded up. 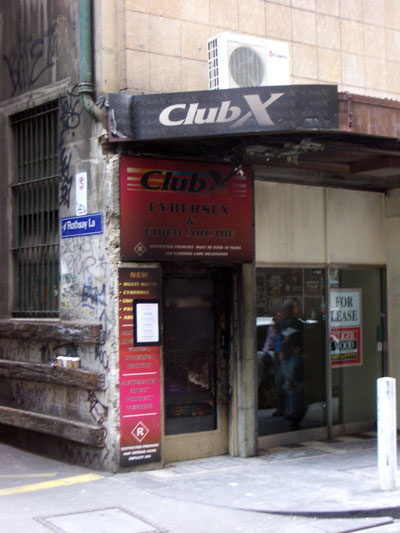 I have been seriously enjoying watching Big Brother (Australia) this year up until last night.Â Â  Channel 10 decided to do some cross promo with their upcoming reality TV show “Australian Idol” by putting one of the judges into the house for a couple of days.Â Â  Kyle is a shock jock from Sydney.Â  I don’t know a lot about him….Â Â Â  but I do know that his time in the house was harder to watch than the mouthy MIchelle who recently put the housemates through a lot of stress and was eventually evicted.Â Â Â  Kyle was set a task to be mean to te housemates…Â  but the guy ended up just becoming annoying to everyone, including the audience.Â Â  After being ignored for sometime in the diary room he picked up a mic stand and smashed his way through an exit door.Â Â  Some say this was all staged.Â Â  He spent most of his short stay questioning the housemates so much that it just became annoying.Â Â Â  Then later in the afternoon he left the house earlier than planned with a “headache”.Â Â  I suspect it was much more.Â Â  What a terrible choice putting this guy in the house….Â Â  it was really embarrassing. 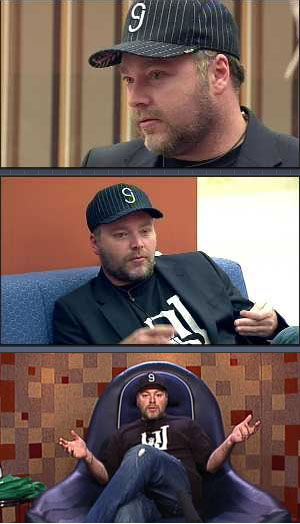 I just got back from the hotel where we did photo and video shoot this weekend.Â  I just got the camera back from being fixed at the shop.Â  And one of the settings was making the photos quite hot (overexposed), which ruined a lot of shots but made some of them quite interesting…Â  like this one out on the balcony. 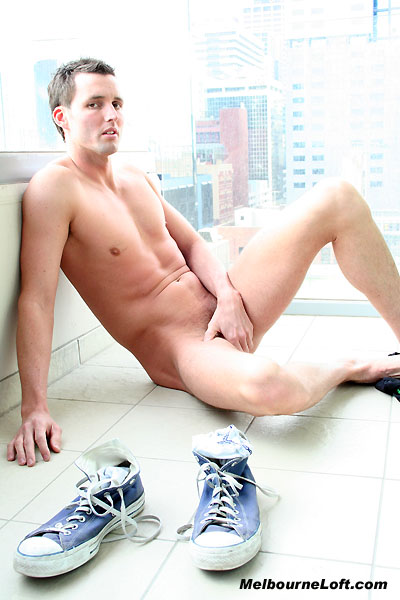 Over the weekend we checked out the new studio equipment store inside Michael’s Camera Store.Â Â  I seem to be spending a lot of time there lately.Â Â  I bought a great backdrop stand for the loft to hide all of the junk from the background of my shoots.Â  This thing extends right to the ceiling and must be about 5 metres wide.Â Â  I just need to find a large backdrop to hang from it now.Â  These guys had some pretty amazing stuff…Â  and really helpful too.Â Â  I’m hoping I’ll get some daylight studio lights next. 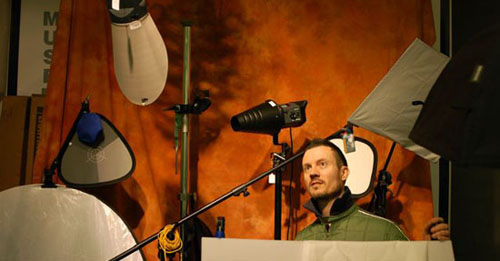 I’ve had Greg staying in Melbourne for the past week.Â Â  It was really nice having a mid-winter visitor.Â Â  I’m not sure he’ll come again when it’s so cold.Â Â  It was funny seeing him putting heat sacks in his lap as he sat and watched TV.Â Â Â  We spent most of the week eating, shopping and…Â Â  eating again.Â Â  I think I may doubled my weight at the Gopals dessert bar during the week! 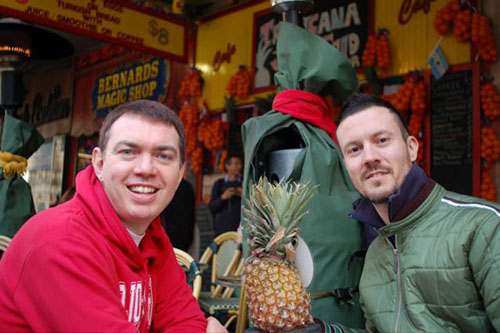 Last weekend I did 3 shoots in one day!Â Â  And it was quite a dark raining day so I wasn’t too impressed with the shots.Â Â  Worse still…Â  the camera had dirt on the sensor!Â  So the shots all had marks on them.Â Â  So the camera is in the shop now getting it’s sensor cleaned.Â Â  This is one of the shots taken from one of the crazy shoots.Â  The rest of this shoot will be in the Private Room shortly. 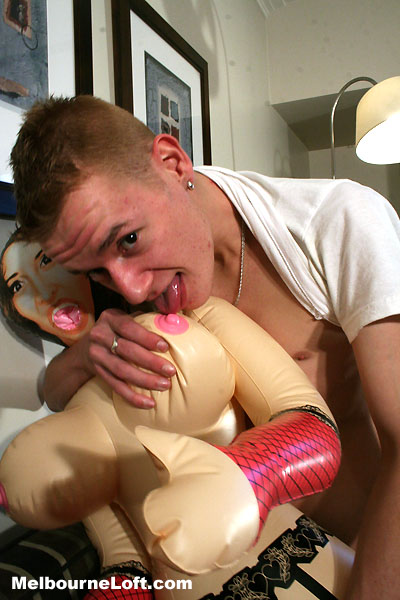 After the shooting of 3 people here in the city 2 weeks ago we are all now more aware of how violent some people can be, and that some people here DO carry guns!
Last night just as I was heading to bed Jake called me to the front of the Loft to look at a fight that had broken out in front of Hosies Tavern.Â  A well known rough stripper bar which often spills over with drunk aggressive men.Â Â  The fight seemed to involve about 20 to 30 guys.Â  One guy was walking out into the middle of the road and was holding up traffic.Â Â  But we all know that sometimes the middle of the road is the safest place to be.Â Â  Eventually a hispanic looking guy with a black bandana on his head and homey style clothes (American TV has a lot to answer for) followed the man onto the street and made him back up all the way to in front of the Loft, put his hand down the back of his own pants and asked the man if he wanted him to shoot him.
So I guess the fun of watching a usual Saturday night fight in front of the Loft suddenly got serious.Â Â  Jake called the police.Â Â  And within 2 minutes….Â Â  6 police cars arrived!Â Â Â  The guys went running down streets and lanes everywhere.Â Â  The cops ran after them.Â Â  But they didn’t actually appear to get any of them.Â Â  I really wish we’d had the camera out to photograph the guy threatening to pull the gun.Â Â  This all happened in one of the busiest parts of town while familes ate McDonalds and sat on the tram stop just metres away.Â Â  I’m so amazed that people can be so stupid!Â Â  Any more of this and the CBD will be deserted again because people will fear coming here. 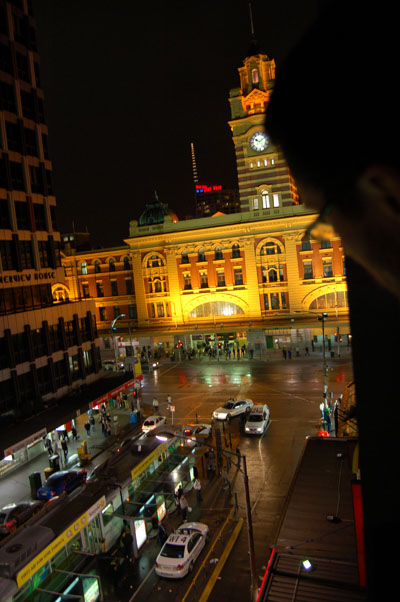