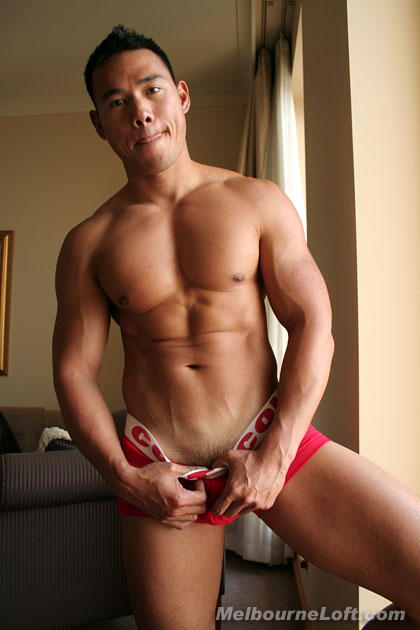 I met this sexy lad last week while I was in Perth. Â  After seeing that body I convinced him to model for me. Â  I’ll post the rest of the shoot in the Private Room soon.

Did you know that the Private Room now has over 50,000 photos and more than 350 videos? Â Â  It has been surprising how quickly the galleries and video arcades have built up! 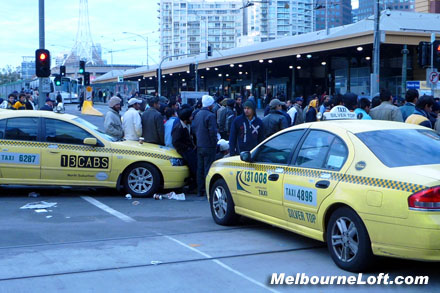 300 smelly dirty taxis were out of service and blocking the streets of Melbourne on Monday night. Â  One thing I noticed during my trip to Perth was that the taxis there are clean and don’t smell. Â  I almost choked on the way to Melbourne airport a couple of weeks ago as my taxi drive sat in a really stinking taxi cab.Â  I couldn’t believe people would sit in it and not say anything….Â  well I didn’t so I guess others wouldn’t either. Â  I really should have gotten out and taken another one.Â  But my suitcase was already in the boot.

So 300 drivers sat in the street overnight (and it got down to 6 degrees) blocking the main streets until the state government stepped in and promised to make it mandatory for taxi owners to install protection barriers around the taxi drivers seat. Â Â  Over the weekend a 23 year old student taxi driver was stabbed and left for dead. Â  With his car stolen he laid dying on the ground for 3 hours before anyone saw him. Â  In Australia at least one taxi driver is killed each year. Â  It’s really shocking the danger these guys put themselves in when they drive at night.Â  My dad tried his hand at driving taxis a long time ago and I’m glad he gave it up.

So Big Brother was launched tonight.Â Â  With new hosts Jackie O and Kyle Sandilands.Â  I feel pretty sad that Gretel is not at the helm of this years household.Â Â  It seems that they have filled the house with a mix of beautiful people and freaks.Â  The looks on the housemates faces was priceless as 1 metre tall Rima entered the house.

But the leader of the freaks has to be Kyle. Â  I thought that shorty Rima was going to scare me…Â  but nothing scared me more than Kyle’s sense of humour and blinky eye…Â  I was actually hoping he was about to experience a stroke right there on national television. Â  Sadly the show was no played live. Â  They could have wrapped the show right there and then! Â  We would all watch the repeat of Kyle losing all body functions on stage for the next 3 months.

And strangely I already have a thing for the guy who escaped the cult. Â  And my fave so far has to be the grandmother.Â  I decided this when her opening line to a blond bimbo coming into the house was “could you find a skirt any shorter?” 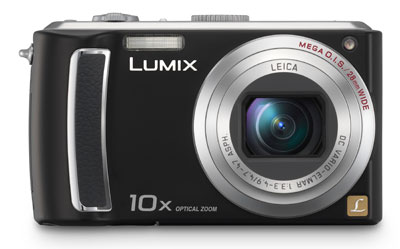 This is the new camera I bought last week while I was in Perth. Â  It’s to replace my little Penatx Optio S5i which doesn’t work anymore.Â  It’s a little larger than the Pentax for a pocket camera, but the photos are much better. Â  In low light it works very well.Â  And it’s got a nice wide angled lens.Â  The shot below was taken with it. Â  Oh… and the 10x zoom is fun too. Â  I haven’t tried out the video mode yet. Â  But I’ve read that it does DVD quality video!Â Â  All in such a small camera! 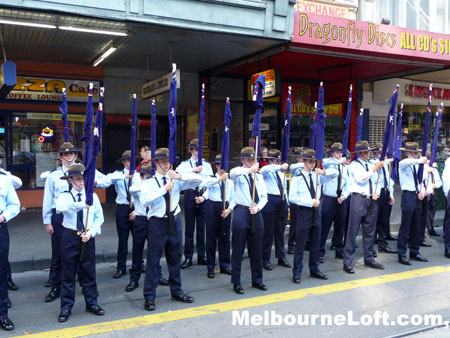 I completely forgot about the ANZAC Day holiday and the parade today. Â  I woke up this morning and stuck my head out the window to see the Army cadets in formation in front of the loft. Â  They were so cute in their uniforms! Â  Check out the kid second from the left holding the flag with the wrong hands. Â  I opted for breakfast instead of going to watch them march. 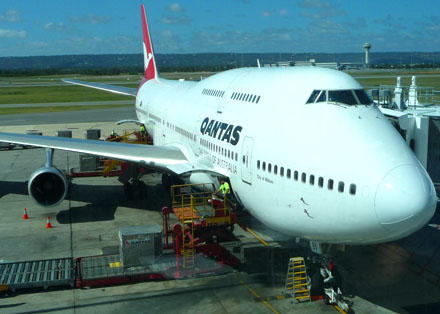 I just got home from spending a couple of weeks in Perth.Â  On the way back I intentionally booked a flight on the old 747-300 operated by Qantas (Perth to Melbourne). Â  The aircraft I was on is 21 years old. Â  I actually thought it was older.Â  The Economy/Business configuration of the 747-300 allows Qantas to squeeze in 450 people. Â  That might explain the long wait for my bags at the carousel in Melbourne.
I enjoyed my ride on the old jumbo. Â  Qantas still has 4 of them in operation on the east to west coast routes.Â Â  I was surprised to see them fitted with video on demand screen at every seat.Â  Not even United long haul jumbos have this!Â Â  But I’m mostly interested in the real age of the Boeing 747s.Â  Does anyone know what the first model was and when it was built?Â Â Â  I have heard that the earlier models are not allowed to seat passengers upstairs because there are no exit doors up there.Â Â  I think some of the Asian airlines still have them.Â Â Â  I was also curious because my 747-300 still had ashtrays.Â  I guess we’ll be seeing more of the 747 fleet flying domestiv routes when Qantas starts receiving the new A380s later this year.

If some stranger were to create a profile using all your photos what would they say about you?Â  This guy has been creating bogus profiles using my photos for years. Â  The username is roughly the same each time and is usually based in Montreal. Â  It’s interesting that this person has chosen me to be a Buddhist and I speak French. Â  I guess I would need to speak French to live in Montreal. Â  Very up to date to!Â  The main shot was taken just a week ago.
Well I have some advice for the person who created this bogus profile (and I know that you will be reading this)…. Â  save me the bother and lose it. 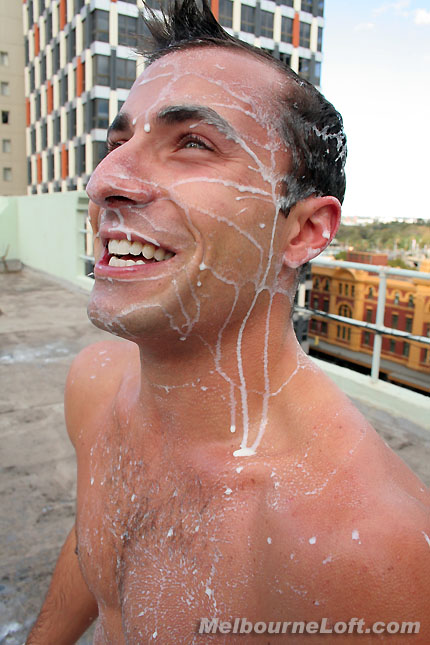 I am loving my photography at the moment.Â  Particularly when I have models who don’t mind pushing the limits.Â  Last weekend we had guys having a milk fight.Â  The rooftop was drenched in milk! Â  Sadly one of my best models (pictured) is heading back home to Europe. 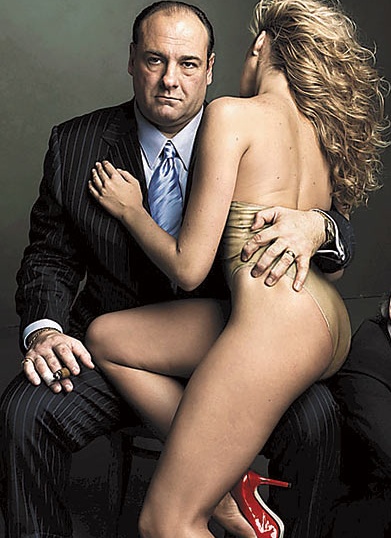 After months of watching series after series of the Sopranos I finally finished the last episode of the final season (season six) back in January. Â  The ending was a little strange, but it was finally over.
Then!Â  a couple of weeks ago when I was in JB HiFi in Sydney I saw something odd on the shelves.Â  There were 2 series sixes.Â  Each packaged a little differently.Â Â  The one I had not seen before was called…Â  THE FINAL EPISODES!!!!

What is this??? Â  Some plot to make people buy an extra series without actually making one??

It’s true…Â  they made another 9 episodes and put it into a series called Season Six…Â  the Final Episodes. Â  So in protest I downloaded it from the internet, even though I would have liked the Bada Bing that was packaged with the surprise series.Â  Well didn’t things get stirred up in the last few episodes! Â  Shootings, suffocation, decapitation, and poor Uncle Junior going mad all alone.Â Â  Boy I enjoyed the Sopranos.Â Â  I did not like the (real) ending one little bit.Â  But I don’t think there could have been any good ending to that story.Â Â  “What are you gonna do?” 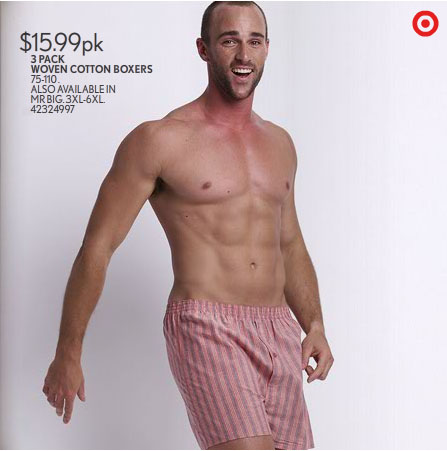 In the Target catalogue this week. Â  Hubba Hubba !