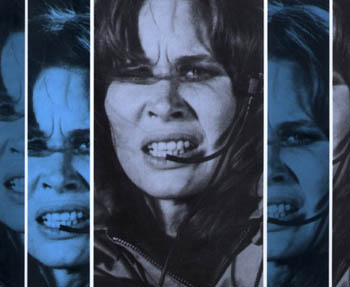 I’ve just finished watching Airport 75 courtesy of Bigpond moviesÂ  (with DVD scratches of course).Â Â  I’m now hooked on the Airport movies.Â Â  77 was pretty good…Â  but you must watch 75.Â Â  “The stewardess is flying the plane!”Â Â Â  That’s right…Â  after a smaller plane runs into the cockpit of Columbia 409 both the co-pilot and Erik Estrada are sucked out the hole and the pilot was glassed in the eyes….Â  leaving Karen Black to fly the plane!Â Â  But strangely… she decided to go back and comfort the flight crew first.Â Â Â  But it’s not long before Charlton Heston and his big yellow teeth arrive in a helicopter to save the day.Â Â
Airport 75 was obviously low budget.Â Â  The painted black spot on the side of the plane wasn’t fooling anyone.Â Â  But the emotion on Heston’s face and the overacting in the back of the plane was enough to keep us all distracted.Â Â  Of course the plane was packed with Hare Krishnas, nuns, alcoholics, a stowed away dog and a little girl needing an urgent kidney transplant.Â Â Â
This is a must see from the 70’s Airport series…Â Â  I readÂ it’s the funniest of the lot too.

Does anyone know how to make screen captures from Windows Media Player or VLC player?Â  Snagit and Ctrl-PrintScn doesn’t seem to work.