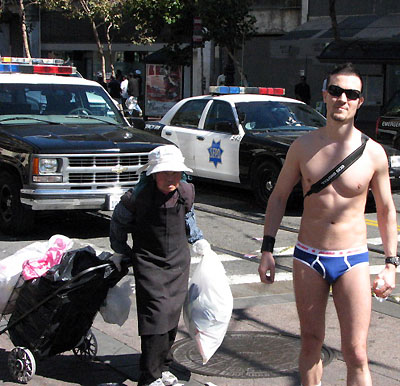 This would have to be one of my favourite photos from San Francisco.Â  You can’t tell from the photo but I’m actually at the very end of the LoveFest Parade after have sat on the road photographing the party people in my undies.Â Â  I figured I would join in on the fun.Â Â  But I didn’t expect the bag lady to jump into my shot as I got Bill to take a shot in front of the police cars which were clearing the street at the end of the parade.Â Â  The LoveFest Parade is probably the most fun parade I have ever been to.Â Â  It’s almost worth going all the way to San Francisco to take part in.Â Â  And as you can see you don’t need to pack much.

1 reply on “Catching Up on the Vacation”