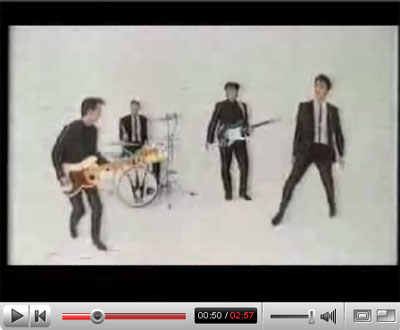 I can’t begin to tell you how excited I was tonite when I searched YouTube for the band “Blue Ruin” as I do several times a year.Â  And I found this video clip (which I had no idea existed) !Â Â Â  It was lifted from ABC’s late night music video show “RAGE”.Â Â  I was deeply into Blue Ruin in the late eighties when they ruled the Melbourne pub band circuit…Â  and occasionally the Kardomah Cafe in Kings Cross in Sydney.Â Â  This clip features probably their most successful song “Bad Gin” and the very original line up.Â Â  You may remember that over 1 year ago they put on a reunion gig at the Corner Hotel in Richmond.Â Â  During the late eighties I had a major crush on the lead singer Ian “Quincy” Mclean.Â Â  I once came to Melbourne to watch him do a Tom Jones review in a small bar…Â  best night out ever!Â Â  Click on the video above to make it play…Â Â  the clip is really cheesey…Â  nothing at all like the gigs they played.